With the weather finally improving – it was definitely time to fire up the bbq. I’ve been looking forward to doing some sous vide barbecue for ages. Everyone’s suffered burnt, dry drumsticks or dangerously pink chicken thighs. Combining sous vide precision with a BBQ’s intense heat and smokiness is a great combination. With all the food below I’m cooking it until done with the sous vide, then browning it on the barbecue. 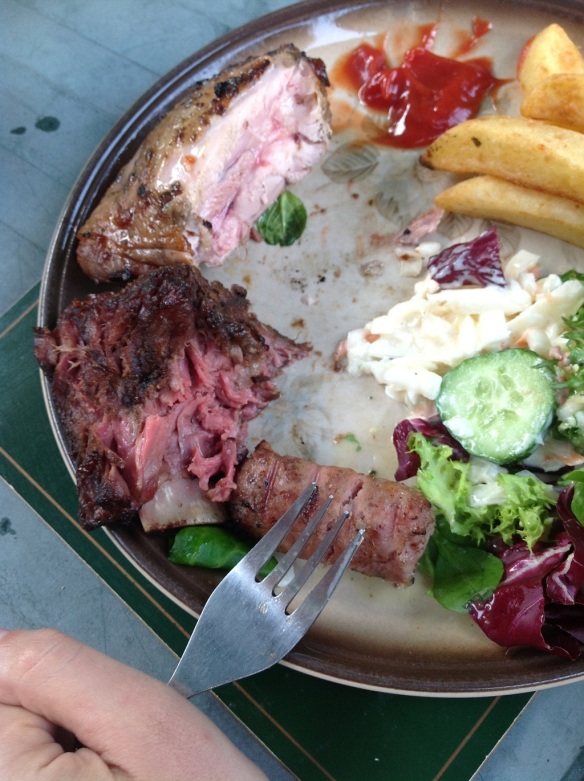 To Sauce or Not To Sauce?

Sticky rich marinades are a key part of a good barbecue, but the difficulty comes in whether or not you include them in the sous vide bag. Heston Blumenthal did some research looking at how marinades soak through chicken, using an MRI to check the progress. The downside to sous vide with marinades that you risk losing some of the flavour as it will dissolve into the sauce, which may not be eaten. In the interests of research I tried both options, and the winner is? Hard to say really – very little difference. Next time out I’ll examine what happens if you marinade before sous vide.

I love sausages – there’s something deeply satisfying about a good banger and some fluffy mash. With shop-bought sausages there’s always some concern over what pork cuts have gone into it and how well the pigs were looked after. The logical solution? Make them yourself. Sausages are surprisingly complex and to get a good texture requires you to add the correct seasonings and the right ratio of rusk/breadcrumbs. While a 100% meat sausage is a nice idea, they end up very dense with an odd mouthfeel. I used a kit from Lakeland to provide the casings and seasoning mix and then some great Blythburgh pork (a mixture of 80% shoulder and 20% belly) for the filling. They had a lovely, quite delicate flavour, the texture was great, but the casings weren’t as durable as I’d hope, a couple didn’t survive the water bath. Next time I’ll try natural hog.

Short ribs are a little unusual in the UK, but very popular in America. In England beef ribs tend to be quite stringy and aneamic – you end up with a thin layer of meet over a very long bone. Short ribs should have at least an inch of thick, flavourful meat over a small bone the size of a business card. The downside to this is that it can end up very tough – the solution? Low, slow cooking, ideally in a sous vide. Because of the huge amount of connective tissue in the meat it needs to cook for a very long time – 3 days is about the optimum.

With a degree of trepidation, I dutifully setup my sous vide, carefully sealed the top to stop evaporation losses and cooked away for three days before coating them in barbecue sauce and blitzing them on a red hot barbecue – the result? Amazing. The texture was incredibly soft, almost mousse like. The meat fell off the bone, leaving it completely clean. The slow cooking brought out the mineral flavour of the meat. Next time out I’ll ease off the seasonings and add something to bring out the sweetness of the meat.

I’ve done burgers twice so far on this blog, so I won’t go into a lot of detail, apart from mentioning the mix that I used: 50% Sirloin, 25% Chuck, 25% Brisket. Very similar to the peerless ShakeShack burger and Heston’s own recipe. It created a much beefier flavour than my previous attempts, though the burgers were very fragile, I need to wrap them tighter next time.

Peri Peri Chicken
Surprisingly the star of the show – chicken works so well in sous vide and the tenderness and moisture is completely unexpected in a BBQ. The thighs worked much better than I expected and the meat delicately flavoured, the marinade worked well, but I’ve definitely seen it go further in.