I like America. I like American food. There’s something faintly naughty about pouring maple syrup on a pile of bacon and pancakes, about tucking into a milkshake the size of your head. I’ll admit it has its faults – their attempts at beer are often laughable and they are a little too fond of the deep-fryer – but none of this dulled my enthusiasm when I heard two of New York’s finest were opening their first European outlets in London this week.

Danny Meyer is a genius. In one of the toughest, most cynical cities in the world he’s created a wildly successful restaurant group based on hospitality. I visited two of his restaurants in New York without even realising the connection but was immediately struck by the genuinely warm welcome, the fantastic service and the knock out food. 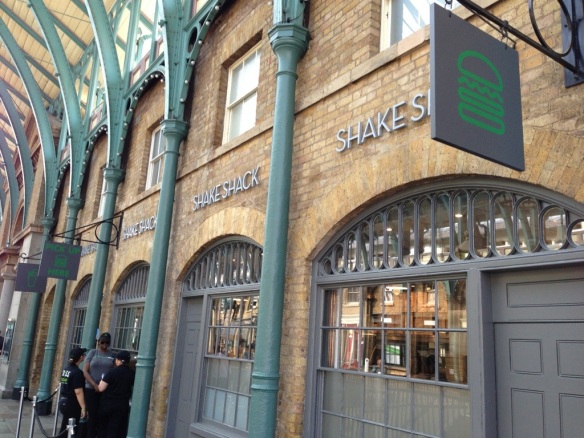 Shake Shack is fast food – imagine McDonalds but with soul. They pick great ingredients, freshly prepare them with staff who are paid a good wage and love their jobs and served with a quirky personality. It’s a great experience – there’s a reason I took a day off work and queued for an hour (along with a horde of other fanatics) to sample their wares!

For the Covent Garden store they’ve maintained most their US menu, but with some clever modifications – they offer a cumberland sausage in their hotdogs and they use paul.a.young chocolate and St John’s bakery products in their desserts.

So how does it taste? Spectacular. The burgers are great – a soft bun that still holds together, tasty beef and a really fresh flavour from the toppings. There’s spice, there’s texture, it’s damn near a perfect burger. The chips are good too – I wasn’t a fan in the states, but these seem crisper and the optional cheese sauce is noticeably better.

The hotdogs are delicious, I adore the cumberland sausage – I’ve never been a fan of the American style beef dogs, they always seem very processed. In their defence – the Shack-ago dog is the best american style i’ve tasted but you can’t beat british pork.

The milkshakes and ‘concretes’ are the star of the show – delicious frozen custard crammed full of great toppings. I tried both the Union Shake (chocolate with brownie) and Drury Lane Jam (vanilla, biscuit and jam) and couldn’t decide pick my favourite.

This is another place i’ve already sampled the other side of the pond. It opened – some might say cynically – the day before Shake Shack. It’s a big unit near Leicester Square station with more seating down stairs. They’re known for their toppings, all of which are available free. Like Shake Shack they pride themselves on using fresh ingredients and employing staff who care.

Annoyingly they’d run out of hot dogs when I visited so I was limited to the burger – I asked for it ‘all the way’ which gets you most of the toppings. The burger is okay – compared to the ‘shack I found it quite… greasy? The bun is nothing special and the fillings lack the freshness of their rivals.

My biggest complaint is with the chips – they’ve been single cooked and badly. They’ve left the skins on, which is fine, but to prevent them burning they’ve had to cook it so gently that it ruins the texture.

One thing I do like is the drinks machine – it’s a Coca-Cola vending machine that can do 100+ flavours – fancy raspberry diet coke? It can do that. Frankly it’s worth a trip just to try out! 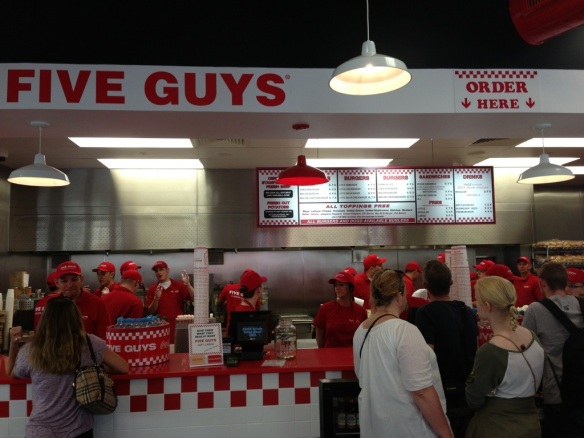 The decor is very American diner and the music is a little loud for my liking. The staff are perfectly friendly but they lack the genuineness of the ‘shack.

To me it’s not even a contest. Five Guys isn’t a bad burger joint – its a marked improvement on McDonalds and offers something different to the GBKs and Byrons of the world – but Shake Shack is just in a different league. The whole experience is great, from the minute you see the menu to the minute you – dolefully – finish your last bite it’s just better. Go, try them for yourself, and see what I mean.