Chicago is a stunning American city. On the shores of Lake Michigan it boasts an incredible art collection, amazing architecture and some superb food. Locals lay claim to three specific specialities – deep-dish pizza, chicago-style hotdogs and Italian beef sandwiches. I set out to try all three, as well as sampling some of their other culinary delights.

Giodarnos
In Chicago pizza is taken very, very seriously. This is not the wafer thin authentic crust of Neapolitan fame – Chicago “deep dish” pizzas are cooked in special pans which allow them to be as much as two inches thick. The crust is much closer to pastry in texture and the fillings nestle under a mound of molten cheese and sweet tomato sauce. 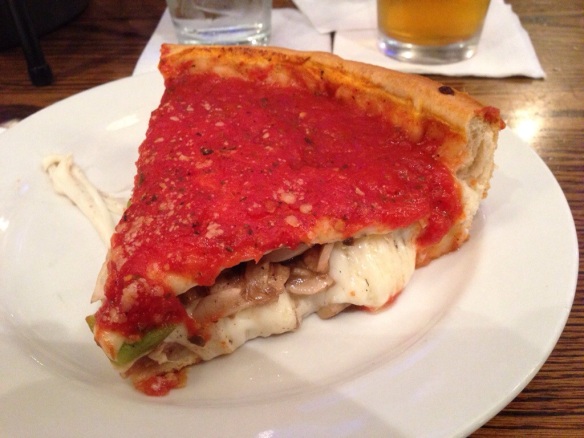 The location of the best pizza is hotly debated, but the ever reliable Lonely Planet plumped for Giordanos. Fresh from the airport is seemed the perfect way to get to know the city. They make most of the pizzas fresh, which is great – provided you don’t mind the 40 minute wait. The end result is a heart attack on a plate. It’s certainly not haute cuisine but it is incredibly filling and you can’t help but smile as stringy molten cheese goes everywhere – it’s fast food at its fun and tactile best.

Al’s #1 Italian Beef
The Italian beef sandwich is a simple thing – roasted beef, with Italian herbs and peppers served in a white roll. Each element is obsessed over: the beef must be wafer thin, the herbs have to be just so and the bread needs to be firm enough. The key element is the traditional “dip” where the assembled sandwich is unceremoniously plunged into the gravy – turning the bread into a delicious, if unstable, platform.

Just outside the loop, Al’s is one of the main contenders for the title of best beef sandwich and a healthy crowd of locals seem to agree. The sandwich itself has a reassuring weight. The beef is very tender and the copious amounts of gravy stop it drying out. It’s rich, savoury and very tender. The perfect mid-week lunch – if you don’t mind the almost inevitable collateral damage to your shirt. Getting messy is half the fun! 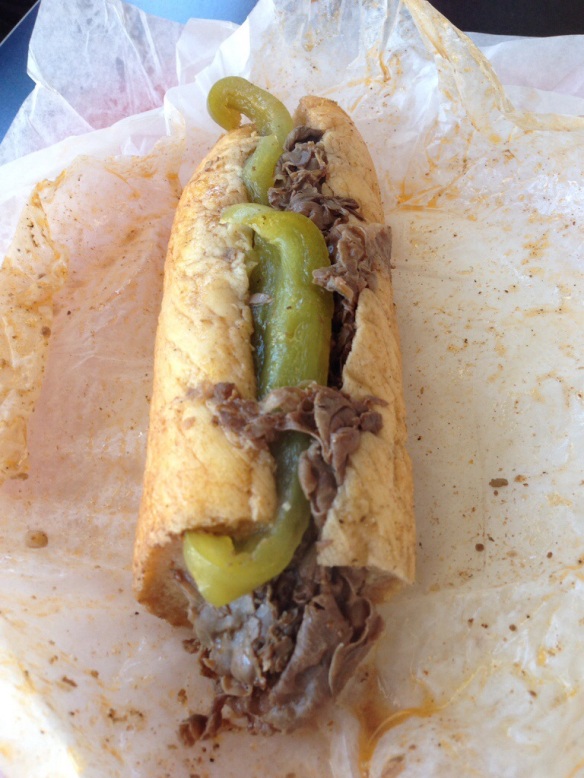 Portillo’s
A few things mark out a Chicago hot dog – namely the sesame seed bun, a wide variety of pickles and onions on top and the total absence of ketchup. I was pointed in the direction of Portillos and was met by a reassuring wall of hungry customers. 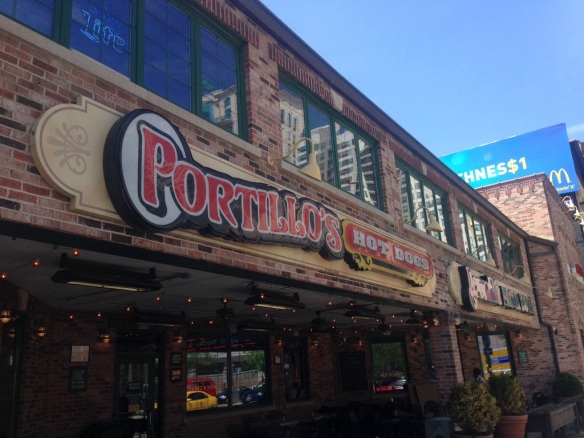 The sausage itself is very traditional, finely minced beef in a snappy, natural caseing. To a British palette it can taste a little over-processed, but Portillos blend is custom made and is much better than the average kerb-side vendor. It’s a good hot-dog and I liked the extra toppings – would a little ketchup really be that horrendous? 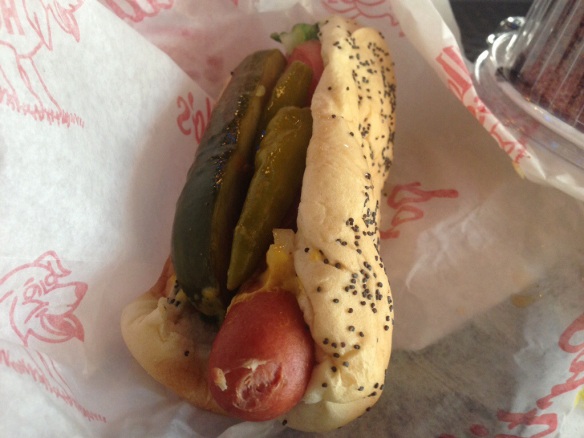 They’re also known for their chocolate cake – always eager to suffer for my art I picked up an enormous slab. It’s actually incredibly light, I comfortably demolished a huge piece after a sizeable lunch. They’ve done something clever with the batter, possibly folding in whipped egg whites. It’s really good! 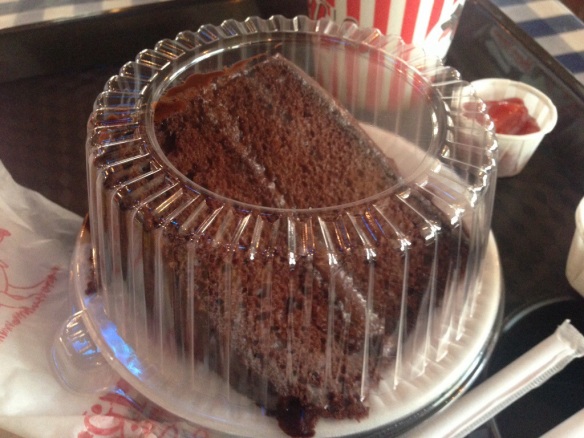 David Burke’s Primehouse
The railroads once transported most of America’s beef through Chicago. Consequently there’s a slew of steakhouses – after a fair amount of research online I chose David Burke’s Primehouse, primarily on the strength of their ageing process. They have a patent on the use of Himalayan rock salt in dry ageing steaks, which they do for up to 75 days.

Situated in the James hotel, the dining room is warm and inviting and the staff quickly had me ensconced at a leather clad table with an excellent cocktail. Instead of bread they provide “popovers” (Yorkshire puddings) – it’s a lighter, beefier, alternative. 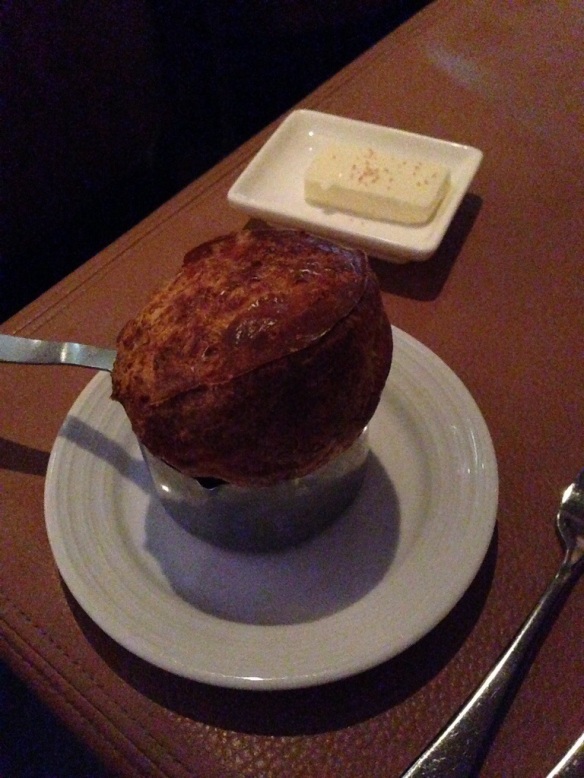 The menu is designed around the steak with some really fun touches. To start I had “surf and turf” dumplings. These came as four Chinese-style dumpling lollipops – little bits of short-rib and lobster with a simple sauce. It’s a really clever way of serving them and ensures you have enough room for the main event. 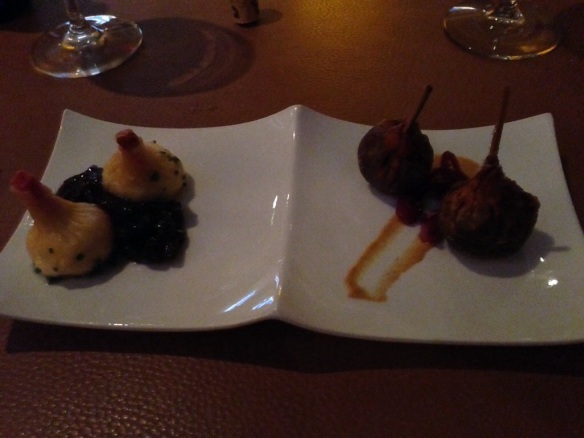 On the waiters recommendation I went for the fifty-five day ribeye. The steak itself was sizeable and perfectly cooked, a thick crunchy crust giving way to a blushing pink middle. It had just a hint of the blue-cheese flavour you get with seriously old beef and the texture was excellent – the fat just melting in your mouth. They brush the steaks with hot, aged, suet to add extra beefiness. As with most American steaks – it did lack that rich, savoury note you get from the best British cattle. To any Americans who doubt it – take a trip to Hawksmoor in London and thank me later. 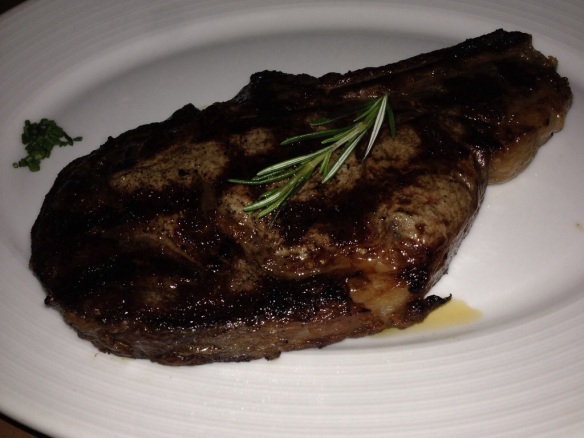 Alongside the steak I had some good truffled fries – interestingly they’d grated asiago (an Italian hard cheese) over the top. The strong umami savouriness works really well with the beef – I’m definitely stealing that idea!

Dessert was just brilliant – mini doughnuts which you get to fill at the table. The waiter provided three small bottles of sauce – vanilla, caramel and apple/ginger. You simply spike the doughnut with the nozzle and squeeze. It’s great fun and would be perfect for a dinner party, another great concept I’m taking home. 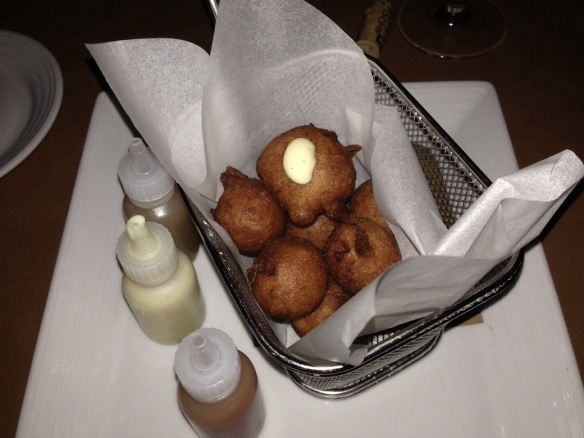 It was a lovely meal, but I can’t get away from the feeling that if you’re going to pay top dollar for steak, it really needs to be outstanding. British beef just has more flavour. That said – their starters and desserts were excellent and certainly more fun than a “traditional” steakhouse experience.

The Palmer House
I don’t normally blog about my hotels, but the Palmer House deserves special mention as it gave the world a truly wonderful gift – the brownie. Developed for the Worlds Fair in 1896 it was meant to be more portable than a conventional cake, perfect for a lady’s lunchbox. The hotel still makes brownies to that same recipe, though they have tarted up the presentation a bit. 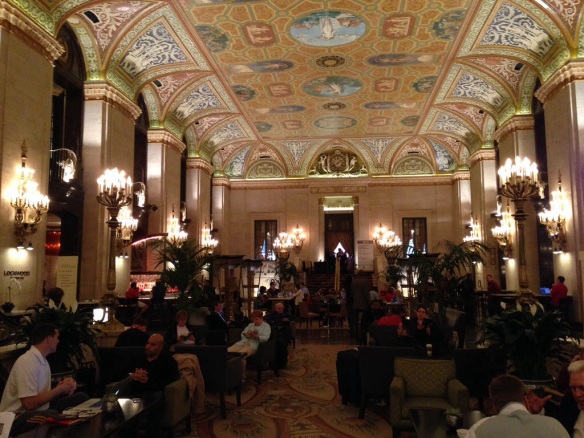 Served with a stout gelato and a milk chocolate mousse it’s a lovely dessert. The brownie is surprisingly dense, definitely at the fudgey end of the spectrum but with a really good bitter chocolate kick. The recipe calls for a walnut and apricot jam topping, and very nice it is too. Milk is a classic accompaniment and serving it as a mousse adds lightness whereas the sharp, beery ice cream helps cut through the richness. 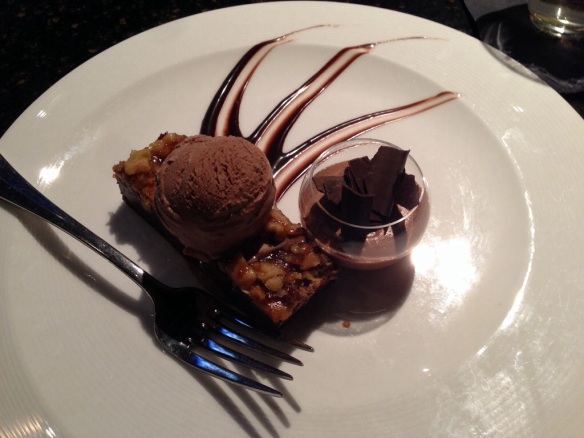 Lou Mitchell’s
A Chicago icon situated near the original start of Route 66, Lou Mitchell’s is the quintessential American diner. Friendly staff serve bottomless coffees and enormous breakfasts while locals chat about last night’s sport. I had a very nice waffle with fruit and a side of bacon. It’s never going to win awards, but it’s cheap, filling and on a wet Chicago morning, the perfect way to start your day. 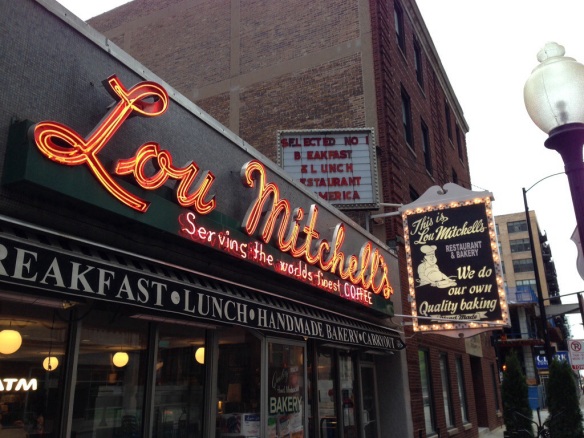 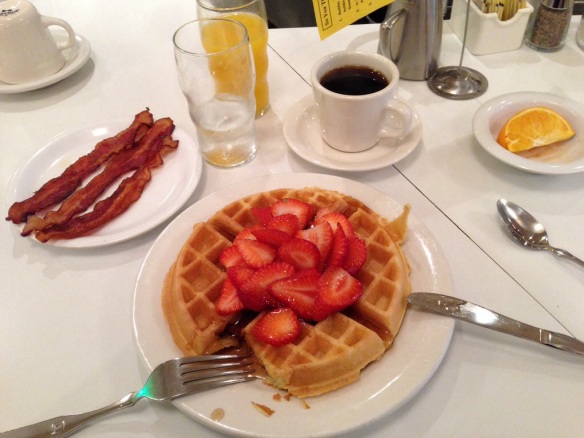 Garrett Popcorn
It’s not uncommon to be innocently strolling around Chicago, admiring the architecture and be suddenly hit with the wonderful smell of hot caramel. Garrett popcorn shops are everywhere and wildly popular. They do a variety of flavours but the local favourite is a “Chicago mix” – half caramel and half cheese. I was initially sceptical but it does grow on you. A ‘small’ bag is simply enormous and kept me going on the long flight to the West Coast. 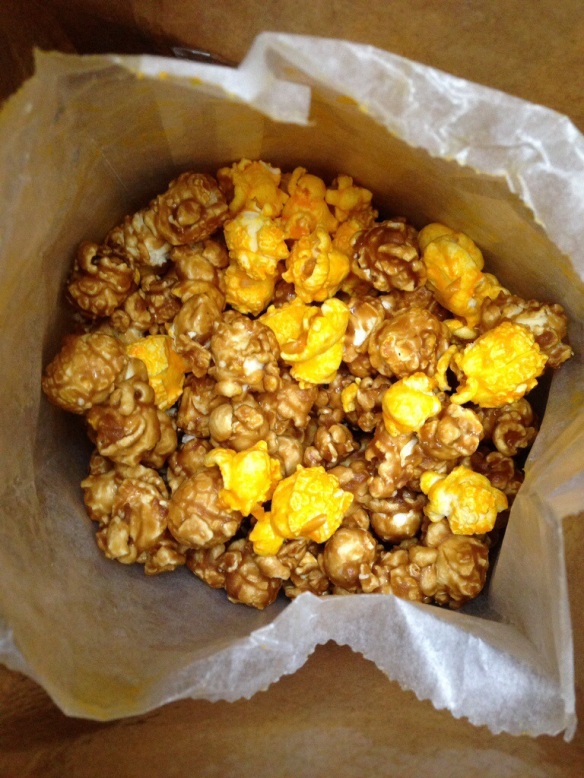