Today was my final full day in San Francisco and certainly one of the best. I tried to hit all the galleries I could and managed: SFMOMA, Legion of Honour and de Young Museum.

The food was equally spectacular:

Rated as one of the top ten places to eat by Tripadvisor, I was keen to check it out. Down near the waterfront, the tiny cafe is run by a friendly staff and serves traditional American brunch items. I went for the buttermilk pancakes and bacon. They were really good, not as upmarket as Mama’s or Sweet Maple, but no worse off for it. 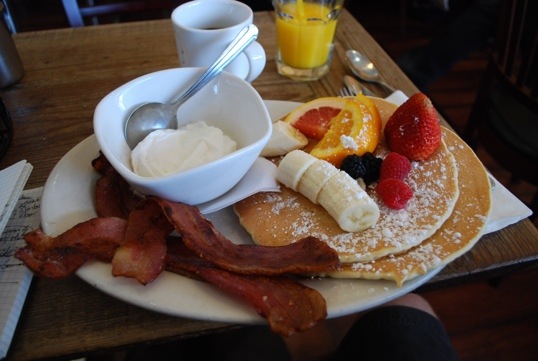 Situated in the heart of the financial district, this is reckoned by many to be the best salad in the city and I’m inclined to agree. Their house ‘box chicken’ is fantastic. Good quality ingredients with some innovative combinations, the chicken was rubbed with a Provençal herb mix, the dressing used pulped apple and the sliced strawberry was an inspired choice.

As it was my last dinner in San Francisco, I wanted to make the most of it. By most lists, roundups and reviews, Slanted Door is the best restaurant in central San Francisco. It serves Asian fusion, pulling on San Francisco’s rich immigrant heritage, fantastic local produce and updating it for the 21st century. Reservations are notoriously hard to get, but a friend of a friend got a table so six of us headed down the the ferry building to see what all the fuss is about.

Starters
Spring Rolls – huge, juicy and with a great lime dip. Nom.
Pork Rolls – self assembly, with lettuce and rice noodles rolled in.
Rice Cakes – Sticky, sweet and very very good. The bitter soy was balanced beautifully against the rice.
Razor Clams – An unusual choice, but a good one. Lots of lemongrass lifted the salty flavours and the meat had just enough texture to hold up.

Mains
Chicken Claypot – One of their signature dishes, if a little 1970s Habitat ‘chick in a brick’. The meat was gorgeously tender and the sauce rich without being cloying. Combining a caramel with the more traditional asian flavours was great.
Shaking Beef – Generous chunks of beef fillet, marinaded and flash fried with lime and cinnamon. Incredible.
Scallops – A tower of scallops and a sweet honey/citrus sauce.
Snowpeas – Oriental mushrooms and mange-tout, just al dente.
Suba Noodles – Light, aromatic and very nice.

Desserts
Rhubarb Pannecotta with a Rosemary Granita – Rosemary and rhubarb?!? Just gorgeous. So refreshing, just needs a little semi thing to turn it into a full dessert, but an excellent palate cleansing pre-dessert.
Candy Floss – A great cloud of light fluffy sugar in the middle of the table on a stick. Great to share I’ve no idea what they did, but the sugar was much lighter and less sticky than the kind you get from a fairground – ultra-refined sugar?
Black Forest Torte – Great chocolate, great cherries, maybe needs a little more alcohol?
Lemon and blackberry tart – Another unusual combo, but it worked really well, great contrast between the creamy lemon mousse and the sweet blackberry mix.

Certainly one of the best Asian meals I’ve had – it shows how good fusion can be, but how carefully it needs to be done.