The weather this weekend has been insanely hot, 32°C in my kitchen, which makes baking pretty difficult, chocolate won’t set properly and pastry is a complete nightmare, but undeterred I made full use of the time.

Foodie Festival – Battersea Park
When the weather is sunny, whats the logical thing to do? Sit in the park drinking cocktails munching on great produce. Foodie Festivals are run all over the country and the showcase local produce and run demonstrations from top chefs.

Clare Smyth
Clare has a pretty spectacular CV, with stints at Louis XV, The Fat Duck, The Waterside, The French Laundry and her current job, Head Chef of Restaurant Gordon Ramsay. She is one of only a handful of 3* female chefs and the only one in the UK.

She gave a fantastic demonstration of one of her dishes from Royal Hospital Road – Suckling Pig. You start with an entire suckling pig (at which point the couple next to me walked out – bless their little veggie socks) which is then presented five ways:

Sausage – From the shoulder and belly
Loin – Simply pan fried
Head and Feet – poached inside a savoy cabbage leaf
Ham – A miniature ham from the leg, cured and served with a miniature pineapple.
Pork Belly – Cooked sous-vide and then crisped

Thats quite a lot of work, but she didn’t tackle it solo, three sous chefs helped and it was amazing to see them go from pig to plate inside 40 minutes – great stuff.

The Food
I ate a variety of different dishes from the various stalls:
Llama Sausage – Surprisingly beefy with a subtle gamey note. Very nice!
>

Argentinian Steak Sandwich – Barbecue is a South American institution and these friendly chaps where cooking up half a cow, using layered racks to beautifully cook great chunks of beef, it was stunningly tender and beautifully smokey.

Moules Frites – The Mussel Men are making a bid to bring back mussels as a British staple, serving up simple, delicious fast food. Very very tasty!

Weird Baking
Strange flavour combinations are all the rage in modern cooking and it’s starting to trickle down to simple things like cupcakes. Keen to get in on the craze I tried two ‘unusual’ recipes this weekend: 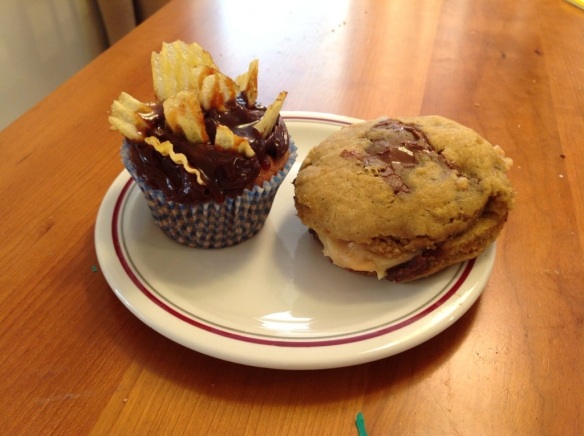 Elvis Whoopie Pies
The King is famous for his rock music, but also for his famous favourite flavour combination: banana, peanut and bacon. Most people look at that and shiver – but was Elvis on to something?

It’s a simple Whoopie recipe, with banana added to the base. A peanut butter frosting filling, crispy bacon pieces and a drizzle of honey make for a fascinating cake. The flavours balance much more subtley than you’d expect it’s very savoury, the banana blending behind the peanut butter which accentuates the salty bacon, the honey lifting it all a touch. Weirdly good.

Choco-Crisp-Caramel Cupcakes
Salt/sweet is an established thing – salted caramel is everywhere these days. Texture combinations are very important, but often lacking from cupcakes. Cupcakes are soft and sweet, what crunchy and salty? Crisps – obviously. I baked up a batch of milky chocolate cupcakes, frosted them with a bitter chocolate ganache and stuffed crisps in the top. Then simply drizzle over a salted caramel sauce – I made mine very dark, next time I’ll take it off the heat earlier.