I haven’t posted my own cooking for a while, but my kitchen’s certainly not been neglected. Over the last few weeks I’ve been hard playing around with all sorts of things.

No morning is complete without it now – I must be on my fourth or fifth batch. This latest one switches the british version’s golden syrup for the orginal’s maple syrup (and a vast improvement it is too). I also increased the fruit content slightly, adding in morello cherries, sultanas, dried blueberries and dried figs. Bliss.

I’ve not really played around with lentils much. Pigeon and peas is a classic french combination, but I find the peas too sweet and the texture slightly too smooth. In pursuit of a rich, earthy dish I went with Puy Lentils cooked in some home-made chicken stock and some fantastic bacon. The result was really nice – the asparagus adds some freshness and cooking the lentils carefully gives it the right body. While I did it as a main course I think it would work better as a starter – the perfect build up to a rich beefy main. 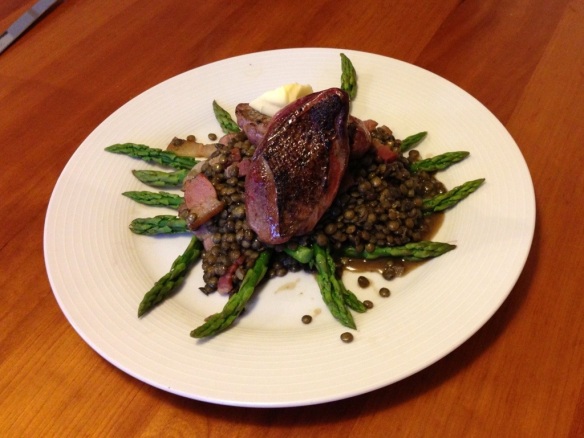 This is probably my favourite chocolate cake, the recipe comes from the ever-reliable Outsider Tart.

I did this for Easter – it’s a very traditional English cake which you just down see any more. Take a standard fruit (or Dundee) cake, up the spice level and bake it with a layer of marzipan in the middle. Then top with another disc of marizpan, eleven marzipan balls (for the disciples who survived holy week) and cover with an egg white glaze which is then browned under the grill. I think eleven balls is a little mean so opt for the more generous thirteen.

I’ve been working pretty hard over the last few weeks which makes cooking in the evening a bit of a chore. I’m also trying to be healthy – honest! With this in mind i’ve started doing a number of really quick mid-week meals. Having some nice home-made tomato sauce in the freezer I cooked off some store-bough fresh pasta, nuked a steak in my griddle pan and had a fantastic, filling plate of food ready in under twenty minutes.

I had some industrial quantities of chocolate that needed using up, so what better way than cookies? This is the chewy recipe from ‘The New Best Recipe’ – an American Encyclopaedia of food. I went with four different kinds of chocolate (100% powder, 70% dark, 40% milk and white). Heavenly. 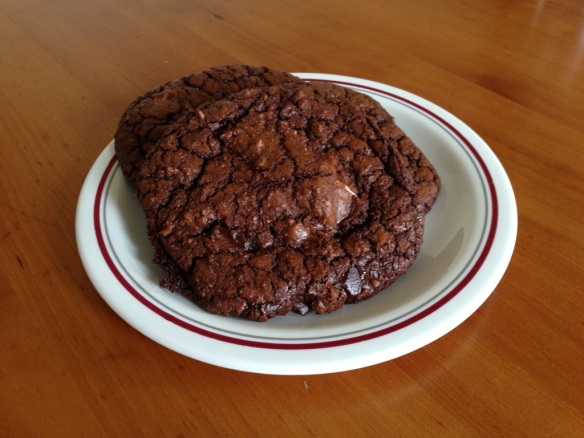 In need of some inspiration on the bank holiday weekend I popped down to the Tachbrook Street market and bought lunch. I pan-fried the mackrel, blow-torched the baby-gems and grilled the tomatoes before dropping it all on top of some lovely fresh sourdough with a squeeze of lime. Lunch in under fifteen minutes – delicious!

Pizza
I’m still working on my perfect pizza – this is the latest incarnation. The base is good – crispy and it puffs nicely. The only downside is that the dough structure is quite dense and I didn’t get enough char on the bottom. Ah well, I’ll just have to try again, what a shame! 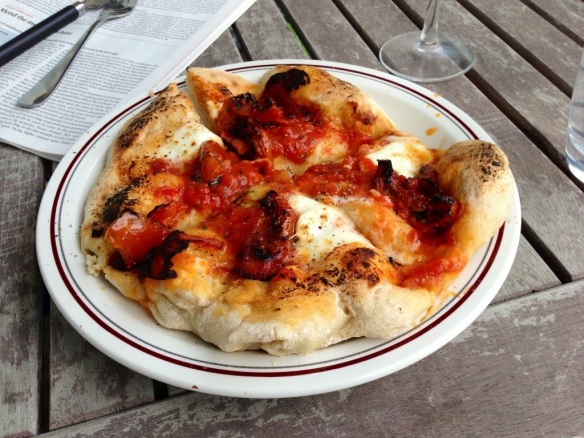