Regular readers will have noticed my recent japanese noodle obsession. There’s something really wonderful about a bowl of richly flavoured broth, soft but slightly chewy noodles and piles of delicious toppings. Having sampled some of the best ramen london has to offer (Tonkotsu and Shoryu) as well as several of the chain versions I decided to give it a go myself.

I’m an enormous fan of Momofuku so it seemed obvious to attempt their recipe. Broadly speaking there are two stages – preparing the broth and then bringing all the components together. Making really good stock is no light undertaking – you need slow careful cooking, broadly speaking more time equals more flavour. Several restaurants quote up to 24 hours for their stocks – unfortunately that’s not really feasible for a home chef, but nonetheless, on a quiet Saturday I gathered all the ingredients and set too. 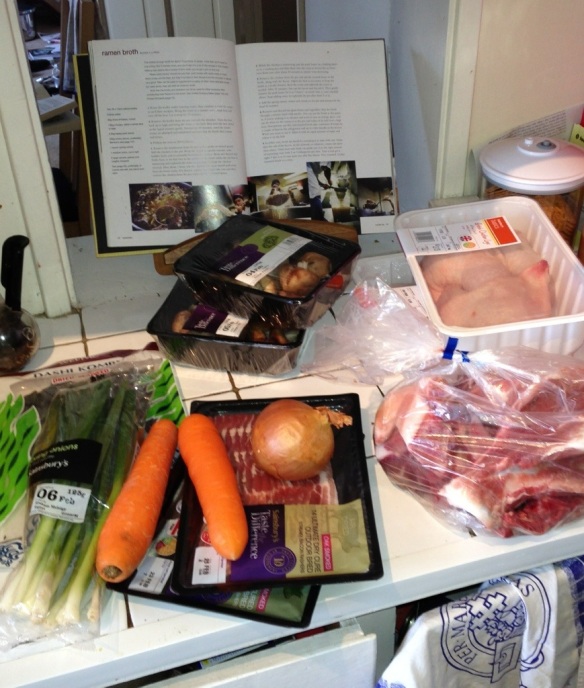 Momofuku’s stock is based on layers each one adding something new and building a very complex flavour profile. You start by boiling up and steeping your water with konbu, which is an edible kelp that contains a lot of natural MSG. In a traditional recipe you’d now add katsuo-bashi (shavings of petrified rotted fish) but Momofuku get’s their umami hit from bacon. This relatively light seaweed and savoury stock is called ‘dashi’ and is the basis of almost all ramen. 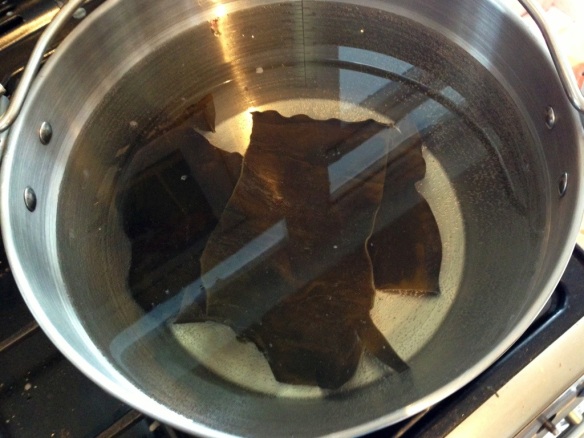 Next we boil up some chicken to add richness and a light meaty flavour. They use a lot of pieces, but don’t despair – once it’s finished the leftover meat is great for soups, salads and sandwiches.

Once it’s boiled for a few hours you switch to some roasted pork bones – this is the heart of the ‘tonkotsu’ style ramen. The pork bones simmer as long as possible before being switched out for some vegetables.

Once your broth is finished you need to skim off the frankly scary layer of fat and portion it up ready for future use. The final step is to season the broth using ‘tare’. Since Momofuku provide a recipe I made my own by cooking down some chicken carcasses with mirin, sake and soy sauce. The result is a thick sweet/salty liquid that tastes very intense..

The actual assembly of the finished dish is relatively straightforward and you can use whatever toppings you like. I followed Momofuku to the letter and went with pork belly, pulled pork shoulder, fish cakes, slow-poached eggs, nori, greens, braised bamboo and spring onions. Fresh ramen noodles are surprisingly hard to get hold of, thankfully Shoryu sell their (incredibly good) version for you to cook at home.

What did it taste like? Pretty good for a first attempt! The broth is lovely, if ever so slightly over seasoned – especially after a whole bowl! I was worried it would taste too ‘porky’ but if anything more bones would have helped! In terms of toppings – next time i’ll slow cook bigger pork joints so they’re much softer and add something with a bit of ‘crunch’, little bits of pork crackling would be great.